We are super excited to share our EP "Mavidavilon" with you all. Have a listen here and let us know what you think!

Our new single "It's Probably Me" is available everywhere so check it here!

We got some beautiful new merch that you can order in the Merch section!

Thank you to everyone who came out and supported us in Austin.

We had a great time and hope to be back in the states soon and also share videos etc shortly.

On Friday (March 25th) we are playing Kulturhuset in Stockholm so hope to see you there!

Our new single "Wrap Your Arms" is available everywhere so go listen here!

The video will premiere on our YouTube  page at 5pm CET on Sunday the 13th of March!

"Wrap Your Arms" will be out on the 11th of March!

We are playing the legendary SXSW Festival in Austin Texas!

More info in the live section.

White t-shirt with front and back print in blue!

Even in the long ago distant times of two years ago, ViVii were defying (and denying) the challenging (or simply boring) realities of life. Even in the good old days of 2018, on only their second single ViVii had one thing in mind: dreaming up a better world through song.

Clearly the Swedish trio – singers and multi-instrumentalists Emil and Caroline Jonsson, and multi-instrumentalist and studio whizz and the bands producer Anders Eckeborn ­– were on to something special. ‘Savant’ has been streamed 4.5 million times on Spotify alone. The self-titled album that followed in 2019 has 14 million streams. ViVii’s sublime dreampop took them round the world on tour, from their production base in Uppsala, an hour north of Stockholm, all the way to the California of The Beach Boys.

“Think of 1969 and you think of The Beach Boys era,” says Emil, the smiling enthusiasm all over his face as he recalls the pilgrimage the trio took to the beaches and neighbourhoods that birthed Brian Wilson’s teenage symphonies to God. That passion is there, too, in ViVii’s single ‘Rendezvous’, the second taster of the treats to come on the band’s second album, due in spring 2021.

“We just grew up on that time and sound. All that jingle-jangle music, we all love it so much!” he adds with a laugh. “So it’s an homage to that time. It’s a romantic tribute to a place and a time and a sound that means so much to us.”

‘Rendezvous’ was preceded in August by the BBC 6 Music-playlisted ‘Summer of 99’. The first fruits of their 2019/20 sessions in Anders’ Uppsala studio, it’s the perfect example of the trio’s sparking, spectral song writing and is another homage – this one to Emil and Caroline’s romance.

“We did the lyrics together,” says Emil, gesturing to his wife. “It’s very personal. For my part, it’s about us growing up. We have such a long history. I’ve been thinking a lot about the lyrics we tend to write, and when I think about teenage rebellion that most kids have, I didn’t really have that. Instead of that I fell in love with Caroline – I fell in love like crazy!” he admits with a laugh. “That was my rebellious time! I was so gone in that. I didn’t see anything. I wasn’t out drinking our partying – in fact, I didn’t start drinking till I was 30!

“So that’s what that song is about, being that young and falling in love, and everything is just so serious. You fall so hard – just like a ‘normal’ rebellious time would be.

“So the song is about proving myself to each other and to everybody else who thinks I’m an idiot for being so in love.”

“That has a special place in my heart,” adds Caroline of song with a soaring chorus and that builds into a pulsing, synth-rock floor-filler worthy of a lovelorn Giorgio Moroder. Fittingly, too, it demonstrates the magic of the couple’s beautifully complementary vocals.

“The second part of the song is all about the rush of feelings,” chips in Anders. “But we didn’t have a plan for that, we just press record. We had one take on the bass, one take on the drums, et cetera. Those are the main influences of our music: Sixties music and German techno,” he adds with a grin. “That’s what we’re always trying to combine.

“A song can be organic in many different ways,” notes Emil. “But for us, that meant pushing the drumkit to the front of the studio with Anders playing it, then he took out the old Juno synths, and we took the space echo, played the guitar… and went for it!”

With ViVii, that connectivity – emotional, musical, soulful – goes three ways. Alongside Caroline and Emil’s personal partnership, their friendship with Anders goes way back, too.

And it underpins the odd but functional manner in which this self-sufficient trio wrote, recorded and produced their new album: working once a week, on Mondays only, because the rest of the week they each had, well, real jobs: Emil works in a cemetery (“I put people in the ground, in the urns”), Caroline is an economic consultant and Anders is an accountant. "Really serious jobs," smiles Anders.

“We treasure the Mondays very much,” explains Emil. “It almost feels like you have a gun to your head. We’re so excited, because it’s always fun to do something new. So if we have a song on the Monday, we want to finish it that day. Then we have a week to think of the next new song for next Monday. So it’s not an evil gun – it’s a good gun!”

“It’s when we get together that the magic happens,” nods Caroline. “Small ideas are put together and whole songs ideas emerge. And when we get together in Anders’ studio, he will start to play one of his ideas from his enormous bank of musical gold on the guitar and that opens up a tap and the creativity starts flowing.

Growing up in Gothenburg, as teenagers each of them played music and sang in church groups, with Caroline and Anders both steeped in classical music at home. Post-school, they then regrouped in music college in Stockholm.

After college, life took over, with Emil and Caroline spending time in New York. There, Emil supplemented their income by revisiting his teenage modelling career (he’ll tell you about that another time), while the couple’s musical skills brought them to the attention of soul star Tye Tribbett, leading to an intense period of American touring as part of his gospel choir.

Anders, meanwhile, had quit playing cello on a professional level having developed severe stress pain in both arms, and due to that was unable to play anything at all. He moved to Norway with his Norwegian wife and while in exile managed to overcome the pain and reinvent a new softer way of playing guitar, the style we now know as the typical ViVii sound.

Fast forward a decade and all three of them found themselves back in Sweden. When Emil and Caroline decided they needed some help for the next musical chapter in their lives, there was only one person they wanted to call.

“When we got together with Anders to write songs, it was so easy,” recalls Caroline. “It was love at first sight. Writing music to me hasn’t been easy with others. It’s always been difficult, not feeling confident enough. But with Anders, it was instantly and always easy.”

Anders agrees. “We’d all been away and played with other people, but together, it was a perfect match.”

“Sweden has a great history of songwriters and producers,” points out Emil. “So you’d sit and do these sessions with other bands and artists, but we just wanted to throw up. It wasn’t our thing. But when we got together everything just made sense. That’s our unique celebratory point – us three are very introverted, a bit sensitive! But together we are so comfortable.”

That ease and understanding is there for all to hear in ViVii’s second album. It’s a set of 11 songs glowing with shining pop moments, including future single ‘Miles To Go’. Echoing the elegant, seemingly effortless song writing of their Swedish forebears The Cardigans, it’s a song that takes a playful dig at an aspect of the Scandinavian constitution – Emil’s opening line is: “You live your life through poetry”.

“I remember we were talking about some of our depressing friends,” he begins, “who are so into poetry and it hurts and they’re so sincere and they’re serious all the time. But us as well, we’re very serious about our music. So maybe it’s pointing the finger at some of our friends, but it’s also a finger right in our face as well.”

That playfulness is also there in ‘Safe Zone’, which could be an outtake from The Zombies’ 1968 psych-pop masterpiece Odessey and Oracle. It’s there, too, in the spring-like ‘One Day’, on which Caroline proves herself a brilliant vocal match for the evocative Californian soul of Lana Del Rey.

But mostly Caroline, Emil and Anders are simply great at being themselves.

Opening ViVii's as-yet-untitled second album is the achingly youthful romance of ‘Fool Alone’. Bewitching and transporting, it’s both nostalgic and future-facing, pre-Seventies and post-2020. It’s also a fantastic showcase for Caroline and Emil’s harmonies, and for Anders’ mastery of studio acoustics and studio electronics.

“It sounds like something from the Sixties, something very familiar – but also brand new,” says Anders. “And it’s such a simple song. All of our songs usually start that simply, but then in the studio we add all the electronics. But we can still play all our songs unplugged.”

“That,” says Emil, “is the core of our songs: guitar, singing, good harmonies.”

“And we have that teenage vibe because that’s when we got together,” concludes Caroline. “Musically, that source is never-ending for us.” 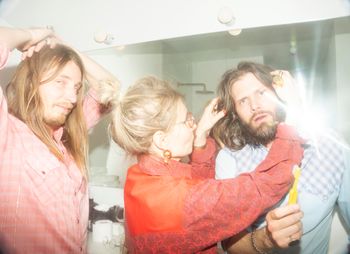 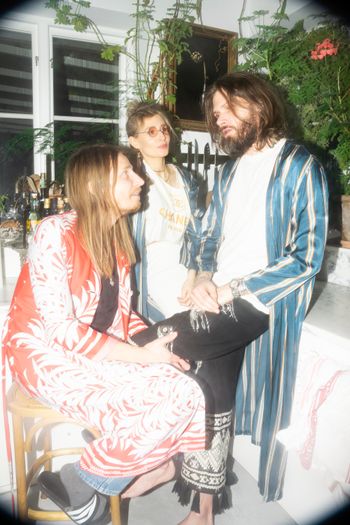 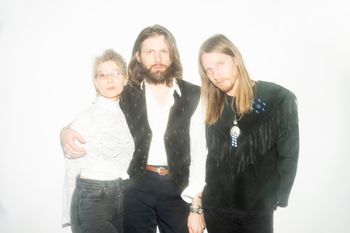